A morning at the Immaculate Conception Convent School in Szymanów 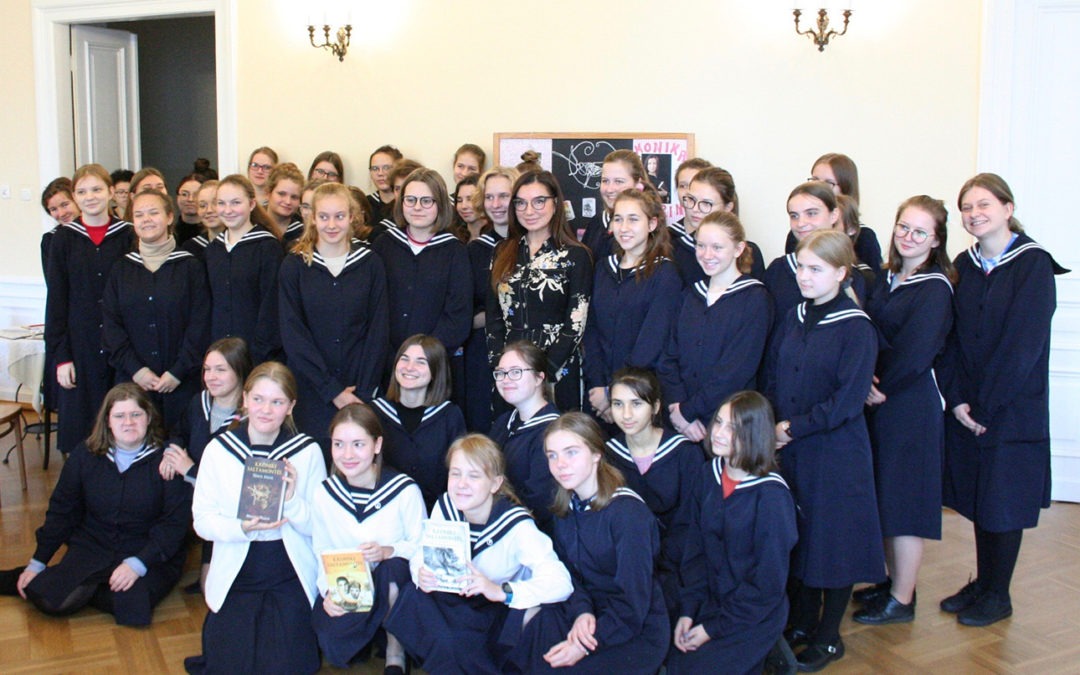 I’m very pleased that my trilogy contains such universal values that people of all faiths and communities enjoy it. It’s a real honour for me, therefore, to be invited not just to state schools but also to religious institutions. That means that the ideas that I smuggled into my books are timeless and universal.

But that was the point – that instead of arguing, people should look for common values in us all!

💚 The story I’m going to tell you today began on 18 September 1907 when  Maria Ciechanowska bought Konstanty Lubomirski’s palace in Szymanów. This is when the school and convent were founded, at a time when it was difficult to actually be Polish. During the First World War, the building served as a hospital. Despite all the challenges, the first matriculation examinations were held in 1927, and on 15 September 1939, 34 girls started lessons at the school. Although the school was “officially” closed by the Germans, lessons continued in secret, and thanks to the sisters’ extraordinary cunning, the Palace in Szymanów gave shelter to 300 people from the concentration camp in Pruszków and hid families of Jewish origin. Even in communist times it wasn’t easy, because teaching and the communist authorities did not exactly get along. None of the residents of the Palace, however, betrayed their ideals – by being shrewd, they taught tolerance and goodness in the context of all people.

I believe in a world full of diversity, which is why I wrote the  Saltamontes Chronicles trilogy. There are no two people the same or no two life journeys the same, so through writing I wanted to show that we humans, despite this diversity, have a lot in common. And along the way I’ve been extremely lucky to meet people who are open-minded. And although we walk on this earth in different ways, we have the same goal – doing good, helping others, and reaching out to the weak.

So I was very pleased to accept an invitation from a highly-involved teacher of Polish at the Immaculate Conception Convent School in Szymanów where, it turned out, they were fans of my trilogy. I set out on Sunday, 27 October, and arrived in the evening at this beautiful school with a soul (just like it was from a film!). Along with Sister Beata, one of the high school students, Zosia, who probably loved the Chronicles the most, showed me around. I was also accompanied by Karen Sayce, the translator of my books into English. You can feel the spirit of the past here at every turn, but the teaching is modern. On the morning of 28 October we had a Saltamontes Chronicles author meeting at the Palace in Szymanów. The sisters and the schoolgirls are open, with a sense of humour, uninhibited and happy. Just like the Polish teacher, Sister Beata – a spiritually beautiful woman with such an expression of goodness that’s hard to resist. And the pupils! We talked for a long time but I felt we could have gone on even longer. About books, writing, motorcycles, experiencing life, travelling – both seriously and not so seriously. About the fact that regardless of where we are in our lives, it’s always worth being decent and unprejudiced, and reaching out to anyone who really needs a helping hand.